This is an interesting topic to read and understand, we all have been affected by these terms, but sadly not many of us know what they mean. This is an attempt to simplify and empower the masses to make the right choice.

What is a drug?

Any substance, naturally occurring or manufactured, which when consumed influences physiological functioning of the body.

How is a drug developed?

Once a disease is identified, scientists study the pathophysiological process, meaning a step by step understanding of how the disease evolves in the body.

After this is done, an ideal stage in the pathology cycle is recognised which can stop further advancement of the disease. Then drugs are developed to deal with this stage of the disease to stop it from advancing.

Development of drug in this modern cutting edge technology starts in a dry lab where supercomputers and best of the best minds cooperate to foster several molecules to act on the objective molecule. Generally, a number of such drug concepts are made and ultimately, one or more drugs get short listed based on its efficacy probability.

Once above is done, next step is to conduct animal studies, which includes studying any toxic (serious side) effects of this molecule. Once the drug passes through these stages, the developer must apply for a Clinical trial in humans from the regulatory body of the country (FDA in USA, EMA in EU).

Clinical trials are carried out in several phases; Phase 0, 1, 2, 3, 4. Once it passes all these stages and the drug proves to have beneficial effect which outweigh side effects, it gets approved and released into the market. Once the drug is available in market, it must be closely monitored for several years, to know any unknown benefit or side effect which was not revealed during development of the drug.

This entire process is termed “concept to market phase”, takes several years and to pass through several regulations, approvals and the trial itself. This phase costs millions to billions of dollars, which is usually spent by developers or pharma company. Government permits the patent of a drug to receive retrieve the invested money.

Why are Patented drugs expensive?

Patent technically lasts 20 years in U.S.A, however, most companies apply for patent when the drug is still in the stage of trials, so the effective duration of patent for the company is usually less than 20 years, depending on how long the drug was stuck in the trial phase before releasing into the market. Hence new drugs are Very expensive, as the company tries to get back money invested and make profit.

Once the patent expires, any company can now manufacture the drug and sell in the market, these drugs are called Generic drugs.

Why is it cheaper to buy Generic medicine?

Companies producing generic medicine have not put resources into improvement and development of these medicines, thus a immense overhead is kept away, which has to be paid by the buyer. If more than one generic manufacturer are making same drug in the market, the competition cuts down the expense a lot. Hence, fundamentally market influences the direct expense.

Is there any potential difference between a Patent and Generic drug?

In theory, patent and generic drugs are same in efficiency that means both of them should have same viability (effect). The only exception is that patent drug is produced by just the only holder or his subsidiaries. They may vary in shape, flavor, color and so on.

What are Branded Generics?

These are off patent drugs branded and sold by pharmaceutical companies as superior to non-branded generic medicines. That roughly constitutes majority of the drugs sold in India.

Why are generic medicines not popular?

The reason behind obscurity of generic drugs is that they do not get enough marketing and advertisement, hence unknown.

However the guidelines about assembling generic medications are clear, to be specific, it ought to be a similar in efficacy and side effect profile like the original, there is no confirmation of the equivalence, as many companies that develop these medications are obscure and consequently a sorry excuse for doubt.

Does a drug have different names?

Yes, each drug has at-least two names that include the Generic name and the brand name under which the company sells the product.

Is it easy to remember or recollect?

To make it easy to remember and recollect, it’s been given a Generic name “PARACETAMOL”, I am sure you know now!

This drug is sold under Brand Name (Branded Generic): Panadol in USA, Calpol in UK, CROCIN in INDIA.

You may also be able to buy the above drug with the name Paracetamol printed on the drug packet and manufacturer or seller’s details, that is Generic drug. Usually, Government hospitals dispense such medicines.

How can a layman know the generic and brand name of s medicine?

Each medicine packet / sheet / bottle should have both generic and brand names as shown in below examples. (Similar concept is applicable to all drugs; tablets, syrups etc).

So, DOLO 650 is a “Branded Generic”, and below is an example of Generic drug.

Being a very old drug, patent of Paracetamol has long expired and there are nompatent versions. 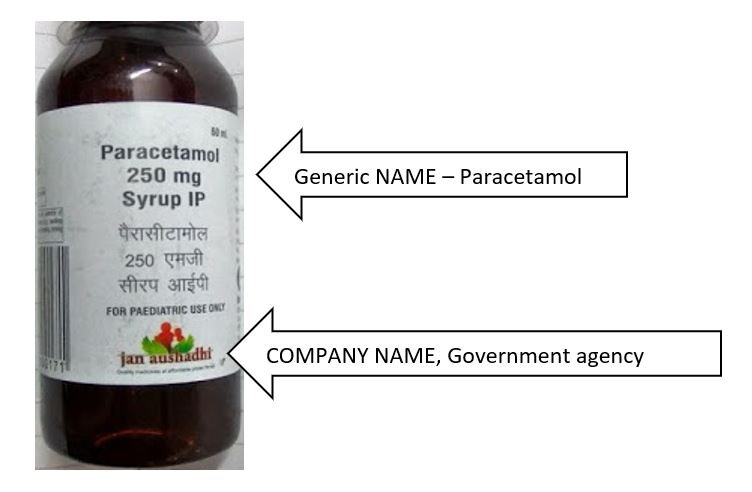 Medical information is simplified to make it easy for a layman to understand, hence it cannot be comprehensive, it cannot address individual needs. No website content can replace expertise of a doctor; hence this information should NEVER be taken as a replacement for medical consultation. It is possible the information may not be accurate and may even mislead in some cases. It is hence advised to seek medical consultation without delay for any queries.